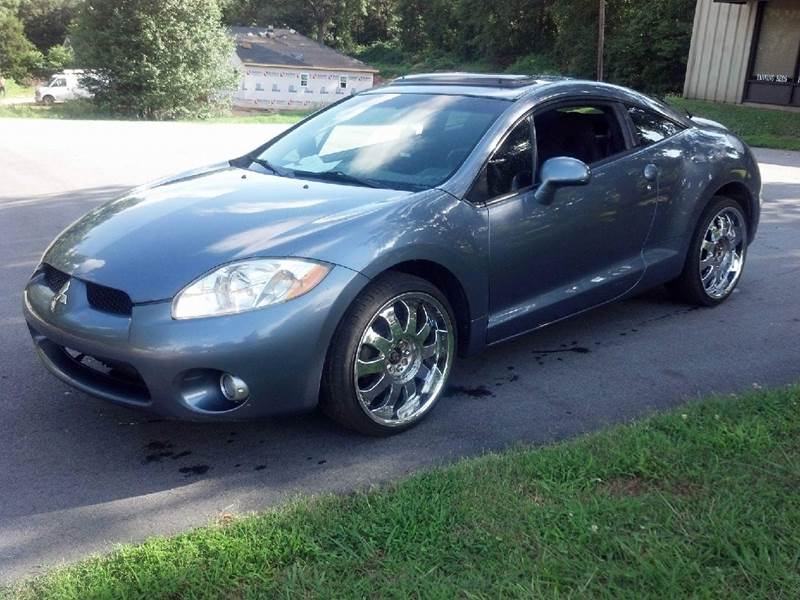 Ready to trade in?
Let us know what you have.
Have additional questions?
Give us a call and we'd be happy to help!

2008 MITSUBISHI ECLIPSE 4C 2D COUPE GS Sun and Sound Package, along with a sunroof, for around $1,800, this nine-speaker 650-watt Rockford Fosgate audio system features a six-disc, in-dash CD changer that also plays MP3 files (but alas, has no iPod connection). Please feel free to call David with any questions. 864-845-1205 Or Text 864-402-9145 10-Year Warranty Mitsubishi's 10-year/100,000-mile warranty on the powertrain is pretty hard to ignore when you're considering the pros and cons of a new-car purchase. It buys you a lot of peace-of-mind. 2008 Mitsubishi Eclipse Details Interior As has been the case in past Eclipse designs, the interior of the current coupe delivers on the promises made by its sporty exterior. An abundance of glass coupled with more interior space goes a long way to alleviating feelings of claustrophobia. Still, the curved dash is designed with such a slant that it almost seems to give off a sensation of movement. Interior fit and finish is tight, and there is hardly a trace of cheap plastic. The well-bolstered sport bucket front seats work well for enthusiastic driving, but are still comfy enough for long road trips. The side airbag on the passenger's seat has a weight sensor that prevents the bag from deploying when the seat is occupied by a child. Exterior The fourth-generation Eclipse could be characterized as more "muscular" than its previous incarnations, with little-to-no defining breaks interrupting the surfaces flowing between fenders and integrated bumpers. The headlights seem to wear shades -- each has a blue-tinted "monocle" lens extending out before it -- and the lights benefit from a multi-parabola design, which maximizes the bulbs' projections. The rear lamps look clear, but shine red with the use of LED technology. The large rear hatch opens to allow easy placement of large items, an uncommon benefit not offered by many coupes. Notable Equipment Standard Equipment The Eclipse's standard equipment includes a 162-horsepower four-cylinder engine, five-speed manual transmission, 17-inch five-spoke aluminum alloy wheels with all-season tires, air conditioning, AM/FM stereo with MP3-compatible CD player, cruise control, power windows, power locks, power mirrors, tire-pressure monitoring system, tilt steering wheel and keyless entry. Both the GS and GT models have well-bolstered sport seats, with the driver's side having six-way adjustment and adjustable lumbar support. Standard safety gear on all models includes driver's and front passenger's front airbags, with a passenger-side occupant-sensing system and seat-belt pretensioners, and front-seat side and side-curtain airbags. The GT adds a 263-horsepower V6 engine, six-speed manual transmission, 18-inch alloy wheels, integrated fog lamps, larger rear brakes and traction control. Optional Equipment One of the Eclipse's most notable options is the 650-watt Rockford Fosgate audio system featuring nine speakers and a 10-inch long-throw subwoofer. It accommodates six CDs or MP3 discs in its in-dash changer. Other options of note are arranged in packages. The Sun & Sound Package includes power sunroof, steering-wheel audio controls, auto-dimming rear-view mirror, center display with outside temperature and compass and the Rockford Fosgate stereo. The GT Premium Sport Package has everything the Sun & Sound Package offers plus heated leather seats, a power driver's seat and automatic climate control. Under the Hood Both Eclipse engines feature Mitsubishi Innovative Valve Electronic Control (MIVEC), which spreads the output over a wider engine speed range and optimizes power, emissions and fuel economy. The more desirable of the two engines, particularly for performance, is definitely the V6, although the tradeoff for the additional power is an expected reduction in fuel economy. With either engine, the automatic transmission has the Sportronic feature, which allows the driver to shift manually by moving the shift lever into the sports-m