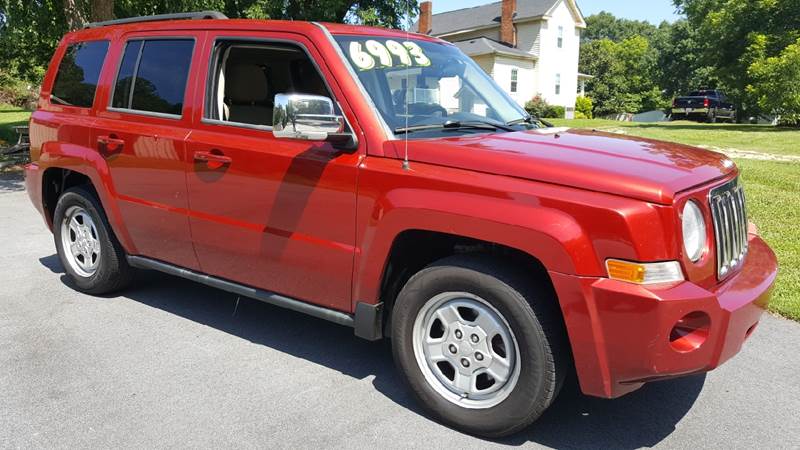 Ready to trade in?
Let us know what you have.
Have additional questions?
Give us a call and we'd be happy to help!

2010 Jeep Patriot Review By KBB.com Editors What's new Favorite Features Based on the same platform, the 2010 Jeep Patriot and Compass have similar measurements, similar price ranges and offer almost identical sets of comfort and convenience features. So why would Jeep produce such similar vehicles? Well, the Compass is intended as an asphalt-tuned ride for city slickers, while the Patriot adheres more closely to traditional Jeep principles. Indeed, the Patriot's more rugged suspension and powertrain options deliver enough off-road performance for it to earn Jeep's "Trail Rated" badges. You'll Like This Car If... Whether you're looking for a daily driver with a rugged streak or a nimble off-roader that you can comfortably take to work, there's a Jeep Patriot model for you. You May Not Like This Car If... Especially compared to the vehicles with which the higher-priced Patriot models compete, the Jeep falls short in overall interior refinement. What's New for 2010 New features for 2010 include the availability of a 5-speed manual transmission with the 2.0-liter engine, as well as remote start and automatic climate control. Driving the Patriot Driving Impressions With the increased off-road capability engineered into it, we might have expected the Patriot's highway ride to be rougher than those of its Compass and Dodge Caliber relatives. As it... ... turns out, the Patriot might be the most comfortable cruiser of the three. The compromise seems to have been made in the cornering department; wisely, where we wouldn't expect or require much from a Jeep anyway. Where the Patriot really impressed us was out past the pavement, where our "Trail Rated" model was able to traverse bona fide boulders with unexpected ease and composure. As with all such devices, the unique behavior of the Patriot's two available continuously variable transmissions can take some getting used to. Favorite Features Freedom Drive II (Trail Rated) Off Road Package "Trail Rated" Patriot models include a Continuously Variable Transmission (CVT2) with low range and 19:1 crawl ratio, skid plates, tow hooks, hill descent control, heavy-duty cooling system, nine-inch ground clearance and 19-inch water fording capability. Liftgate Speakers As part of the 458-watt Boston Acoustics premium audio system, the Patriot's rearmost speakers flip down from the open liftgate to project outward. Outdoorsy Jeep types will find it an especially alluring option. 2010 Jeep Patriot Details Interior If you've spent time in most any Chrysler, Dodge or Jeep vehicle lately, the design and materials that define the Patriot's passenger cabin will likely feel familiar. It's not an unattractive environment in which to spend a commute, but it's among the least interesting interiors in the category. Some of the standard and optional features that count as bright spots include comfortable seats, a fold-flat front passenger's seat, 115-volt power outlet, auxiliary audio input, outward-projecting rear speakers and a removable and washable vinyl cargo floor. Exterior Whereas the Compass's styling trends toward the softer side of Jeep design, the 2010 Jeep Patriot's decidedly squarer lines and boxier stance evoke the purpose-built style of the now-defunct Cherokee and, to a lesser degree, its Grand Cherokee successor. Limited models are distinguished by bright inserts front and rear, bright roof rails, fog lamps, body-color side moldings and 17-inch aluminum wheels. Notable Equipment Standard Equipment A base 2010 Jeep Patriot Sport comes equipped with cloth seats, a four-speaker AM/FM/CD-MP3 sound system with auxiliary audio input, 16-inch styled steel wheels, air conditioning and a collection of standard safety equipment that includes front and side-curtain airbags, electronic stability and traction controls with rollover mitigation and four-wheel anti-lock brakes (ABS) with brake assist. Optional Equipment The 2009 Jeep Patriot's optional equipment list includes